Don’t Be A Writing Hermit! Why Writers Need The Outside World. 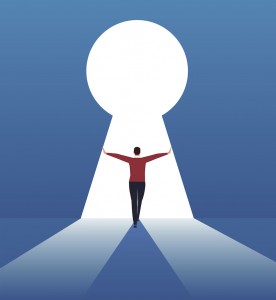 I spoke to someone the other day. Someone that wasn’t there.

Now before you reassure me that talking to your characters is OK. That, in fact, every writer from time to time has a held a little tête-à-tête with the people in their book just to check how their doing, and make sure they are still on the same page, it wasn’t that. I just said something, out loud, but there was no one else in the room.

It took me a while to realise the gravity of the situation. My partner was away on business. I’d done a big food shop before he went, so the kitchen cupboards were stuffed full of supplies, and apart from grunting merrily at fellow dog walkers when going on a daily jaunt with Bert (the happiest cocker spaniel in the world), I realised I hadn’t actually spoken to another human being in three days.

So when I said something aloud in the kitchen that day, it worried me. It wasn’t so much the fact that I had spoken, more that the sound of my own voice startled me. Like I, for the merest of moments, had forgotten what another human being sounded like.

Looking back I realised it wasn’t the first occasion something like this had happened. Since becoming a full-time writer, there have been numerous times when I have accidentally failed to leave the house for a few days. Washing has also become something I consider far less necessary than before. I get up at 6 am, have a nap after lunch, and work into the night – becoming increasingly disheveled, wide-eyed and skittish-looking as each hour goes by.

But perhaps this is something that I need to change before it’s too late.

There have been plenty of instances of madness in literature. It’s not just wildly insane characters, but rather the many authors who created them that have suffered an unquiet mind. Look at Plath, who became so depressed she put her head in an oven and succumbed to its deadly fumes, J.D Salinger, who spent much of his life cooped up inside the buildings and grounds of his estate which was heavily guarded by dogs and enclosed by high walls, or Charles Dickens who, in his later years, became rather obsessed with the occult.

Yes, there are plenty of examples of writers going mad, and I wonder, was it because they just forgot to talk to other people?

Writing is, by its nature, a very solitary experience. This is particularly true for the novelist. It is rare that one requires the services of anyone else. Especially now, being able to access information about anything and everything as quickly as your fingers can type it into Google, you don’t need to actually talk to anyone to research your book. You can find out everything you need to know online, and the rest of it, well you’re just making it up, so communicating with anyone becomes an unnecessary distraction.

There is, of course, a danger in this, and not just because it is all too easy to find yourself having gone three days without changing your pants. Or because your dog is pawing at you for a walk as you sit, hunched and pungent, typing furiously away, without stopping to look up, and pause for a moment to appreciate the disgusting reality of the situation.

No no, the price one pays for this voluntary solitary confinement is far greater – it can make you a worse writer.

Getting too wrapped up in your own little writing world can be tempting. When we are truly immersed in our writing, the universe outside our front door can all but disappear. This is both a gift and a curse. To be so involved that hours can pass like seconds is a sure-fire indicator that you are onto something great. However, if you become too detached from reality, how can you hope to improve?

Surely it is by communicating with others, by meeting new people, by having different experiences, and traveling to different places both near, and far that we get inspiration for our writing? Without keeping our feet firmly on planet earth and getting out there and exploring all it has to offer how can we expect to write stories to which other people can relate? Writers ask their readers to trust them, that they will guide them into a world that is believable and tell them a story that they have not heard before. But if they have no experience of the world, and what it is like to live in it, how can they expect to achieve that?

The same goes for writers who refuse to share their work. If you keep your ideas, your creativity, and your work all to yourself you deny yourself the opportunity to get better. Sharing your work with the outside world, and getting feedback can change and improve your writing more than you ever thought possible. If you never let anyone see it until it is perfect, you run the risk of it becoming so precious to you that the day never comes.

In short, don’t be a Sméagol.

Sméagol found something beautiful, bright and shiny and instead of sharing it with others, he kept it a secret, a secret that led him to live a life in the shadows, deep underground where he grew increasingly pale, straggly of hair and mentally disturbed. Writers may find themselves clutching onto their ideas and their writing and snarling at anyone who gets too close. But if we don’t break free of that, it can be all too easy for our ‘precious’ writing to become something we cannot relinquish, and all of a sudden it’s too late – and then one day we find that we are living in a cave, talking to ourselves and shoving still-alive fish into our insane, dribbling mouths.

Of course, lots of people think that perhaps creativity and madness go hand in hand. There has undoubtedly been a lot of research on the subject. The notion of the ‘mad artist’ has been mentioned by thinkers as early as Aristotle, who wrote:

‘Those who have been eminent in philosophy, politics, poetry, and the arts have all had tendencies toward melancholia.’

Many Shakespearian plays also allude to this fact, for example, this line from A Midsummer Night’s Dream:

‘The lunatic, the lover, and the poet / Are of imagination all compact.’

Does creativity require a certain loosening of one’s grip on reality? Perhaps. Certainly using one’s imagination, at times, requires a suspension of disbelief. Many writers travel through eras and into worlds that are not wholly their own. In fact, they don’t travel through them; they create them.

Creating believable worlds, however, does mean you have to live in one. Writers are weavers of unique universes and tall tales, but keeping our feet firmly on the ground is important.

Because of this, perhaps next time I find myself jumping at the sound of my own voice, I will make sure I switch off my laptop, get out there, and go and have a conversation with someone. I’ll look at something ace in nature, sit on a bus and eavesdrop on conversations, or just talk to a dear old friend. Just be out there, living, breathing, and taking it all in.

This way the next time I want to create a fictional world, I’ll be able to take all the things I have seen and done and design one that I genuinely believe in, and, really, that’s what it’s all about. Because if I don’t believe in the worlds I create, then why should anyone else?