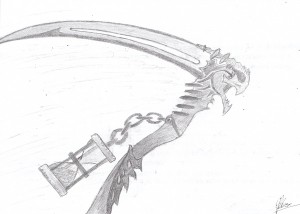 There was an awkwardness that netted the air. I thought this strange as it was coming from him, yet he as the one who was here with a purpose, who had intruded in on my life, in my house. Who had done this a million times before.

He cleared his throat and slowly swung his scuffed loafers back and forth, barely grazing the laminate flooring that covered my kitchen. He was of average size, olive skinned with just a hint of age showing in the lines that had delicately formed above his eyebrows. They gave him a welcome look of permanent surprise as though he was not quite sure what he was doing here. I hoped this was so, that he’d made an error, that he had not come looking for me, that he’d got the house number wrong. Mrs Grainger next door -she was old, and had been complaining of headaches of late, perhaps he had meant to go to her…

I wanted to believe this more than anything yet something told me he was not in the business of making mistakes.

He wore grey cotton trousers and a fitted lilac shirt that demonstrated the slightest hint of a pot belly subtly taking shape. Through my hopelessness I found this somehow comical –he was nothing like I’d expected him. Had I expected him? I couldn’t be sure.

‘I take it you knew I was coming?’ he asked, reading my mind as the hairs on my arms stood to attention yearning anxiously to separate themselves from my skin.

I tried to look into his eyes hidden beneath a mop of soot black hair to see if he was joking. He avoided my gaze and cleared his throat once again.

‘No’ I responded feebly. ‘I might have got dressed if I had known.’ I gestured to myself with a weak smile standing soapy and shaking in my bath towel. He appeared not to understand as if half naked middle aged women were something he dealt with all the time. I did not think that this could be the case, statistically I mean. Though I was equally sure I was not the first and would undoubtedly not be the last.

He started to pace around my kitchen picking up objects and staring at them intently before suddenly loosing interest and putting them back. A mug from my husband, Jack. A sock from the radiator. He paused at the fridge and fingered a painting Helen had done at school earlier that year. He did this with the utmost care as if he wanted to ensure his presence was unidentifiable, that it changed nothing.

I began to cry, slowly at first with gentle shakes and then it possessed me and my knees gave way as though they were suddenly made of cotton wool. I fell to the floor sinking my face into its scorning plasticity hoping it would suck me in and I could live.

He sighed and pulled out a stool from under the kitchen table pulling up the knees of his trousers to reveal a flash of crisp white cotton where socks disappeared into shoes. ‘Why do they always do this?’ he muttered. He addressed this to his feet  making my heart lurch towards my mouth as if even it no longer wanted to be part of me. Why was he looking downwards? This was not a good sign.

I peeled myself up and pulled a stool up behind him, leaning round to place my hand on his arm, noting the paleness of my skin against his shirt. It did not look real, like the hand of a china doll.

The words came out in bubbles. ‘I’m not ready, it’s not fair, please come back another day.’ They popped in our ears and fell to the floor, landing sticky and empty on the ground.

He shook his head. He looked at me for the first time and I realised it was not up to him. I felt a sharp pain in my chest and a squealing in my ears like pigs on their way to the slaughter. I tried to move my hand away from his but it was stuck. He continued to stare right into my eyes. He looked sad. He touched my hand with his own and at once I relented and  I could feel myself  leaving. Regret saturated my pores as if this was all I had ever known. It was not meant to be like this. So many things I should have said or done. I looked towards the fridge at Helen’s painting. It was of us, our family, and the dog of course.

My last thought of all things was of that sock. I saw it  slip behind the radiator. Jack will never find it I thought. I frowned. Then I was gone.