Why Do We Treat Writers Like Children? Is Writing Confidence To Blame? 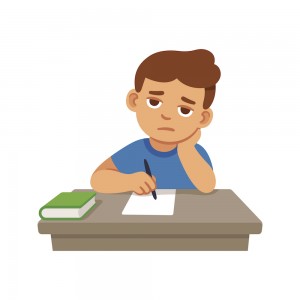 Whenever I read writing advice, one thing that comes up time and time again is writing confidence – and the fact that writers don’t seem to have any. That our lack of conviction is our biggest obstacle and that only if we were able to believe we weren’t entirely dreadful at what we do we’d be on our way to fame and fortune in the blinkety blink of an eye.

Now I’m sure you’ve heard of a self-fulfilling prophecy, and that’s what I think is happening here.

The more we writers read about how scary it is to be one, how bitterly cruel rejection is, how we will have to keep picking our broken, battered, soppy-eyed egos off the floor without any real hope of it being better the next time around, the less confident we get, the more hopeless it all seems and the more helpless we feel to take back control.

I do not deny that writing is hard, but so is any job that’s worth doing. Writer’s need to shake off this assumption that we need our hands held and our fragile egos massaged or that we’ll retreat to a state of miserable, tortured isolation if things don’t go our way. In short, people need to stop treating writers like children and instead like the smart, creative businesspeople that they are.

Imagine a writer telling you that they are good at writing. Imagine it! How very daring that someone who has been practicing their profession for years and who dedicates themselves to learning and improving has any sort of impression that they might be competent at what they do. How arrogant! How obscene! Why do writers have to be seen as these shy, rather pathetic little creatures, “oh please sir would you kindly mind just taking the very briefest of glimpses at my manuscript? No? How very silly of me for asking sir. No problem sir, thank you very much for your time.” [backs into the shadows weeping softly].

Writing confidence – why the shortage?

So who is to blame for this continued infantilization of writers? In short, it’s everyone.

There’s all this talk of how we should be more self- confident that we should believe in our dreams, and not let that blinding b’tard of an inner critic take over and ruin our potential to be the next big thing. But the reality is, it’s not necessarily writer’s themselves that are to blame. Instead let’s point the finger at the people in the industry, our teachers, our colleagues, and yes, even our nearest and dearest family and friends.

People who mock or patronise you when you tell them what you are trying to achieve are particularly guilty. You know the ones whose eyes glaze over, and voices go up a notch when you tell them you’re a writer — the ones who sigh ‘ohhhhhh good for you” while peering over your shoulder desperate for a conversational escape.

Then there are the teachers who smirked when you said you wanted to be a writer and carried on pushing you to make decisions and study subjects that you hated because they would get you a ‘real’ job. Or perhaps that delightful individual at a dinner party who thinks it is ever so helpful to start telling you the depressing statistics of how unlikely it is that you’ll ever be published.

Oh, then there is the person who once said to me ‘the best thing you can do for your career is to die.’

Thanks for that, I’ll think about it.

People don’t ask us questions; they are afraid to. What if we’ve been writing for 20 years and never been published? What if we ask them to read our book and they hate it? We’re like a kid who’s done a crappy finger painting that you have to put on your fridge for weeks on end or that feigned interest you must conjure when your child presents you with a bottle of homemade ‘perfume’ they’ve created from rotten flower petals and puddle water. It’s just easier to pat us on the head and say ‘well done you’ and then move on as swiftly as possible.

Then, of course, there is your nearest and dearest. The friends and relatives who refuse to take you seriously or never quite get round to reading anything you’ve written. Of course, they find it perfectly acceptable to force you to listen to them droning on for hours on end about a spreadsheet-related disaster and what an idiot Sandra from HR is. But dare you ask them for a few hours of their valuable time to share something that’s truly important to you and suddenly they literally don’t have a spare minute. How convenient.

People act like we can’t handle rejection, and yeah, it hurts, but believe it or not we’ve all got our big boy pants on, and we don’t mind it if someone doesn’t like what we’ve written. We aren’t stupid. We know it’s tough. We know that we’ve got more to learn. That there is loads of competition out there and even if our writing is quite good it doesn’t mean that publishers and agents are going to want to try and sell it to the masses.

Writer’s should be seen and not heard, or should they just disappear altogether?

Being ignored by agents, publishers and the rest world is another way writers are treated as though they aren’t yet old enough to join in with adult conversation. It’s a kind of rudeness that if applied in almost any other situation would be considered entirely unacceptable.

Oh, you are inundated with proposals. That’s fine. It’s great that agents and publishers are managing our expectations and all, but the bare minimum they could do is to take a moment to craft an actual, personal reply. Telling us to wait on the edge of our seats for months on end but to be aware if a certain time frame passes we’ve definately been rejected. Come on. Writer’s spend months, even years writing and editing their work, then spend way too much time fretting over drafting a perfectly crafted, expertly researched proposal just for you, and you can’t even take the time to say thanks but no thanks?

But it’s not just fiction writers that deal with this rudeness and patronisation. Freelance writers bear the brunt of it too. Some of the jobs I’ve seen suggest a wage that equates to a paperboy’s round in the 1950s. Then there are the delightfully condescending job posts – ‘make sure you don’t plagiarise otherwise we won’t pay you.’ It’s the equivalent of telling someone off you suspect might cheat on a test or copy someone else’s homework before you’ve even given them a chance to do it.

Most writers have more going on in their lives than just writing. We have partners, kids, dogs, other interests; you know just other stuff we need to get on with. We are grown men and women with lives and responsibilities, and we can’t afford to lock ourselves in the bathroom and have a meltdown if things don’t go our way.

Writing confidence grows as writers learn more about the craft, but despite this most of them write fully aware that they’ll never get published, but they do it anyway because they love it. Isn’t that amazing? So perhaps it’s time to recognise that, to focus on the courage and strength and general grrrrrrrrr it takes to be a writer and to stop treating them like children and applaud them for being the powerful, determined people they are.

Tags: tips for writers, writer advice, writer creativity, writer inspiration, writer's life, writing confidence, writing tips
← The Myth of The Perfect Writing Space
Writers! How To Write The Perfect Christmas Card →
Related Posts
‘I Got A Puppy And Now I Do No Work.’ (How To...
Everyday Writing Mistakes And How To Make The Most...
Writing Sacrifices – What Will You Do To Bec...
New Year’s Writing Resolutions For Everyone
Comments